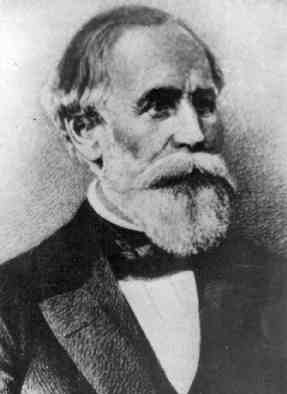 William Thomas Mulvany was born on 11th March 1806 in Sandymount near Dublin; Ireland and died on 30th October 1885 in Düsseldorf, Germany. He was an Irish business man in Germany and one of seven children. His father was an artist. Mulvany married Alicia Winslow from Fermanagh Ireland in 1832. They both had five children and lived in Düsseldorf from 1855 onwards. His journey to Germany began in 1855 as a representative and partner of an Irish investment company, seeking to participate in coal mining in the Ruhrgebiet, just North of Düsseldorf. His focus was the infrastructure and the establishment of new markets for the coal of the Ruhr. For the coal pits “Zeche Hibernia” (Gelsenkirchen) and “Zeche Shamrock” (Herne) he brought many highly qualified English workers to Germany, and introduced new working methods to extract hard coal in the industrialising Germany.

Mulvany was also very active in Düsseldorf. He had great visions for Düsseldorf. However, none of his vision became reality during his lifetime. He founded the “Düsseldorfer Börsenverein” (Stock exchange) together with Christian Trinkaus, which developed into the Düsseldorfer Börsenverein in 1874. He had also planned to give Düsseldorf the largest harbour facility on the European mainland, by building a canal system between the boroughs of Heerdt and Lörick. This project however, was never developed. Where todays “Theodor Heuss” bridge crosses the Rhine (built 1957), Mulvany had also planned a bridge to connect Niederkassel with Düsseldorf a century earlier. During his time in Düsseldorf, he lived on the “Prinz-Georg-Straße” in D-Pempelfort. His property not only housed his residence, but also offered space for an anglican church – “Christ Church” for the growing British population, which was his initiative.

A road was named after him in 1937 in D-Düsseltal. Unfortunately, Christ Church was destroyed in World War 2 (ironically by British bombers), but rebuilt to serve the Rhine Army after the war. It is the building we still use on Rotterdamer Straße in Düsseldorf. Since 1985 we also have a small statue of Mulvany, to commerorate his work as a pioneer and visionary to Düsseldorf. Today, Christ Church in Düsseldorf serves the whole Rhineland region in and around Düsseldorf. We are experiencing a growing church family from many nations around the World who live in and around Düsseldorf permanently or just during the time their jobs bring them here. The colourful mix of nationalities and cultures makes the Christ Church family special. Many Germans also regularly attend our services and enjoy the modern way of worship which we offer. If you would like to learn more about William Thomas Mulvany, please do get in touch with us.